No2 of 50 Things to do on the Redcliffe Peninsular

Stroll along the Redcliffe Jetty and enjoy views to Brisbane and Moreton Island.

The original Redcliffe Jetty was built in 1885 at Red Cliff Point, Queensland’s first settlement, to provide landing facilities for travellers from Brisbane Port. Since 1824 the area had been a popular spot for day-trippers and holiday makers who travelled from Brisbane by coach – a four hour trip; the Jetty cut travelling time by half. In 1889 the Jetty was extended 290 feet making the total length 700 feet. The gazebo was roofed and plumbed by a couple of local blokes free of charge and the sea wall was added in 1918.

By 1919 the original Jetty was deteriorating and declared unsafe, then closed to the public in 1922. A new, longer Jetty was built alongside and a toll of one penny per person was imposed in 1924; but it was abolished in 1925. Electric lights were installed in 1930. In 1937 the Jetty Pavilion was replaced with a brick structure which still stands and in 1938 the Half Way House gazebo included an entertainment parlour. In 1961 the last remaining commercial boat user of the Jetty withdrew services after reporting on the deteriorating condition of the Jetty. In 1973 the Half Way House was demolished. A couple of years later, the Jetty was severely battered by Cyclone David, but it was 1995 before a further risk assessment was carried out by the Dept of Transport resulting in vessels being banned from mooring and gates being installed to prevent pedestrian traffic in unfavourable weather conditions. Expressions of Interest were called for the third generation Jetty and two years later the new design, including the breakwater, was put on display. The second Jetty was demolished in 1998 and the 3rd creation of the Redcliffe Jetty, the one we use today, was opened in 1999. It has heritage lighting and lights, plus an information board with photos depicting the progression of the Redcliffe Jetty. 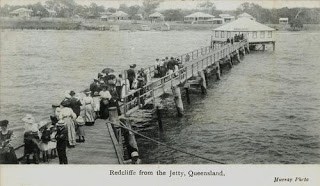